In this post I want to give my views of Methodism, and John Wesley. Let me say that I am kind of unique in some of my views, and I have read a lot in some of these different denominations and groups. But I have also studied cults and religious sects, and I am keenly interested in separating biblical Christianity from man’s creations.

But on the other hand, I do not agree with Calvinism either, and their foundations are just as equally opposed to Scripture that I know. Of the two, each has certain beneficial aspects of their movement. Calvinists study Scripture intensely, maybe too intensely because they are trying to justify their unbiblical position. But the good thing about Calvinists is that they do exposit Scripture (as a habit), and they rely heavily on Scripture to make their arguments. Their downside (besides jumping to unbiblical conclusions in election and other things) is that they are a bunch of “cold fish”. Calvinists have a hard time getting any passion raised about prayer, preaching, or soul-winning. I see that passion in Jesus, the apostles, Paul, etc. That tradition or primitive church element is just lost on modern Calvinists.

The good thing about Methodists is that they are a passionate bunch of people that will move your soul if you will allow yourself to be carried along in their stream for a while. Works like those by Andrew Murray, E.M. Bounds, and others of similar vein that were born and worked in the Methodist structure are great works to get your soul fired up. The downside of Methodists though (besides their unbiblical position on a second work of grace) is that they rely way too heavily on experiences and emotions, and the modern Tongues and Charismatic movements are greatly off-base scripturally because of this foundation from their background. I would also say that Methodists in general have a great desire to love Jesus (emotionally), and they put a lot of emphasis on holiness and piety. As I meet Calvinists that are conceited in their own personal “election” and live like devils, I greatly appreciate the Methodists as a contrast.

It would be great if we could take the best of each, and avoid their disadvantages.

END_OF_DOCUMENT_TOKEN_TO_BE_REPLACED

So what are the characteristics of an Emergent Church? In this day and time, some may try to hide themselves, but with a little knowledge and work, you can clearly identify them.

END_OF_DOCUMENT_TOKEN_TO_BE_REPLACED

What is the Churchs Purpose?
By Pastor David Cox

Before I begin, some personal background. I am a missionary, and I started visiting churches presenting my ministry in Mexico to churches back in 1983. I have probably visited some 700-800 churches in my lifetime. While a goodly number of churches I have little to no idea of how they function, and what the thinking of their pastors really is, a lot of them I do see into their philosophy from talking at length with the pastors, and seeing them function on a Sunday in their services. Let me also say that over time, a missionary can discern a lot about a church from the details that are readily visible.

END_OF_DOCUMENT_TOKEN_TO_BE_REPLACED 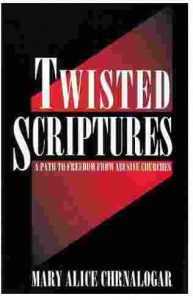 Twisted Scriptures: A Path to Freedom from Abusive Churches, Mary Alice Chrnalogar, 1997. By wielding distorted Scripture, controlling groups keep earnest believers struggling under the terrible tyranny of oppression, guilt, and fear. The author says, “This book will take you into the inner workings of abusive and controlling groups to show you how they control their members. I will make clear the mind games that many of the major destructively controlling groups have in common.” Checklists at the end of each chapter offer good topics for discussion. Ms. Chrnalogar is herself a former member of an aberrational Christian group.

What is the Emergent Church? 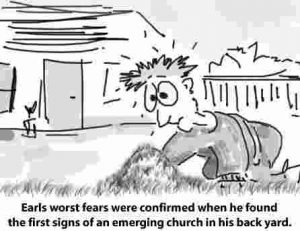 They believe that the old time religion just isn’t good enough. We need a new way of “doing church”.

The basic idea here is that the church should morph itself (emerge) as it moves through cultures and times. It declares as a fact that times have changed, and we are in a time in which the church that could have been fine for people in the early 1900s, just is out of sync with people of our day. That moment of modernism is gone. This transition into “post-modernism” is a change from the old and failing methods of old (i.e. that of cold, hard facts) have given away to the new (warm, fuzzy, subjectivity).

An “emergent seed” is one that is just breaking the ground. They want to identify themselves as the birth of real Christianity. This birth concept is important to get. They, the Emergent Church, is what real Christianity is (to them). Real Christianity hasn’t yet begun in the time period 1 A.D. through 2000 A.D. What the Apostles and all the church family from then to now have experienced was all wrong. Only now is the real church of God appearing, and it is appearing “in them”. They trash the real Bible, the real church, and the real salvation, fabricating something else, and making that their “real” thing.

It emphasizes experience over reason, subjectivity over objectivity, images and presentations over words, doctrines, and commands. This shift in ideas are determined (by this Emergent Church Movement) to necessary to engage the current culture.

I found this interview from Lamb and the Lion ministries being a tremendously helpful way to understand the Emergent Church. This movement is a saturating piece of Satan’s plan in the overthrow of all religions so that he can form into a one world religion.

END_OF_DOCUMENT_TOKEN_TO_BE_REPLACED

Discerning if you are in an Emergent Church

How to find out if you are in an Emerging Church

When we understand what an emergent church (see my previous posts), we must understand that these are wolves in sheeps clothing, that have slowly and astutely inserted themselves within the body of Christ to work the work of Satan. But they will never identify themselves. You will see them as nice, reasonable, friendly, courteous people that are the most likeable people in the world. Maybe, after things have gone done the trail a real long ways, somebody strange and new will stand up and start saying some things that just knock you down. They will say things something like against the Bible, that it really isn’t our guide for our lives. Jesus isn’t really God. Everybody is already saved, and there is no need nor reason to try and witness or present the gospel to the unsaved because everybody will eventually go to heaven anyway.

In my previous posts, I have shown that the Emergent Church is basically a doctrine of demons, coming straight from the pit of hell, and its objective is to destroy traditional church as God has taught us in Scripture. In the first post, I added a video of an interview that explains much about how and why this movement is demonic and antichristian.

Any one or more of these things will be said, and you will be bolled over, but as you look around and expect a mass riot from your friends and neighbors in that church, nobody even takes notice. You are in an emergent church, and never knew it.

END_OF_DOCUMENT_TOKEN_TO_BE_REPLACED

VanVonderen, J. – Families where Grace is in Place 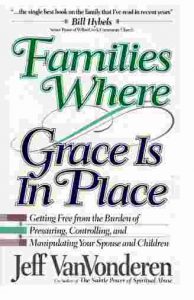 Families Where Grace Is In Place: Getting Free from the Burden of Pressuring, Controlling and Manipulating Your Spouse and Your Children, Jeff VanVonderen, 1992. “Here is a message about how God’s grace can transform relationships within a marriage and family.  The first step is learning the simple difference between God’s job and ours… Healthy relationships between husband and wife, between parents and children, are possible only when the filter of God’s grace is placed over the processes of marriage and parenting. The Christian family’s ultimate goals can be arrived at without using legalistic and manipulative methods.” (Quoted from the back of the book.)

Lloyd-Jones, M. – Spiritual Depression: Its Causes and Its Cure 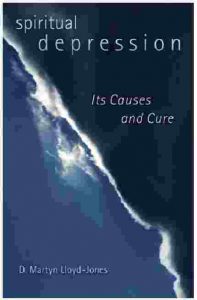 Spiritual Depression: Its Causes and Its Cure, Dr. Martyn Lloyd-Jones, 1965. Gently but firmly addresses potential causes including inability to receive forgiveness for all sins, not moving beyond past failures, seeing only bad and not good, not recognizing false teaching, lack of faith, not seeing trials correctly, etc. This older book stays centered on Biblical solutions. Very helpful.

The Assumption of Mary into Heaven

The Assumption of Mary into Heaven

The Assumption of Mary into Heaven
By David Cox

See my tracts on Catholicism here

This Catholic doctrine is of very recent devise, but it basically reads that Mary never really died like most other people, but ascended directly into heaven at some point similar to Enoch and Elikah, without having died.

“When the course of our Lady’s life on earth was ended she was taken up body and soul into heaven” (Mary—Doctrine for Everyman, p. 34).

As in our other studies on Mary, the Scriptures are totally silent on Mary, Jesus’ mother, after her assembly with her other children in the upper room waiting for the day of Pentecost (Acts 1:14).
END_OF_DOCUMENT_TOKEN_TO_BE_REPLACED

See my tracts on Catholicism here

Contrary to what many people understand, the term “immaculate conception” doesn’t refer to Jesus’ being born without sin, but rather it refers to the Catholic misunderstanding that Mary had to have been born without sin also, because otherwise she would have transferred her sinful nature to Christ.

“When we say that Mary was conceived without sin we mean that from the very first moment of her existence she was free from original sin, she was full of grace” (Mary—Doctrine for Everyman, page 17).

On December 8, 1854, Pope Pius IX declared Mary had been born without sin. Thus, they explained Jesus’ sinless nature and held on to the doctrine of inherited sin. AllanTurner.com

This doctrine is involved with the Catholic doctrine of inherited sin, which is not biblical. They believe that every human being inherits the sin of Adam through their parents. A few salient points from Scripture is needed here. END_OF_DOCUMENT_TOKEN_TO_BE_REPLACED