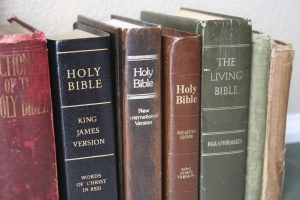 Bible Versions. I should start off this post by saying that I believe and use the KJV as my Bible version when I use an English Bible. I am a missionary fluent in Spanish, and use a Spanish Bible version in my church in Mexico City. Let me just say that people who are honest and look at this issue from all sides, and if that person is a modern day “Fundamentalist”, he would have problems “getting into bed” with any one of these theories floating around out there.

There are basically two main attitudes or dispositions about Bible versions:

(1) The Textus Receptus (TR) or King James Version (KJV) is the only acceptable Bible version.

(2) There are good and bad Bible versions/translations of passages based on the translation, and which manuscript you use. (Westcott-Hort theory)

Within the TR or KJV position there are problems, such as which one of Erasmus’ 3 versions is the final Word of God. If his version of the Greek N T is what is used to “set in concrete” the official good Greek manuscript, then why was there three, two attempts that didn’t work, and a final one that is inspired or almost inspired? This position holds that nothing but the KJV is the Word of God, and everything else is a bad Bible. So if God’s Word is not the originals in Greek and Hebrew, then which one of Erasmus’ versions is the final version and why are there three? Why do Protestants hold that God inspired a Catholic priest (to his death loyal to the Pope and a Mary worshipper) to give them their inspired Bible?

The key is “if God’s Word is not the originals in Greek and Hebrew“. This is what should be our position, if it is not. I believe in the originals as having the ultimate authority. This position is also not without its criticisms though.

Westcost and Hort were Anglicans, and on that side, they had “doctrinal abnormalities” that a modern day Fundamental couldn’t accept either. Lest we get onboard too quickly with either position, let’s remember, that everything bad about Westcost and Hort as far as their Anglican factor, the KJV translators had the very same problem.

As such the positions are not that easy to discerned. Having said that, let me observe that as a Baptist, I believe in Soul liberty, and therefore that doctrine teaches that anything that is not clearly defined in God’s Word is therefore a matter of conviction, something which we cannot split and divide the body of Christ over if somebody else differs from us on these issues. Does the KJV Bible have a verse that says, “You must use the KJV version of the Bible?” No. So it is a matter of conviction. There is nothing wrong with telling people you recommend the KJV, but you “cross the line” when you say you are sinning if you use anything else, or they tell you that you are in heresy if you use anything else.

There are bad translations of the Bible out there. The reason why they are bad is important. NO BIBLE TRANSLATION IS BAD BECAUSE IT IS NOT THE KJV! This polemic that has been spread all over the world is simply ridiculous. No thinking Christian will let another Christian come into their life and dictate this issue for them. That is what Catholics, Mormons, and Jehovah’s Witnesses do in their groups. “Just do this our way because it is sin if you do not.” “The reasons don’t matter except that I as your authority tell you to do it.”

At least some KJV proponents do try to give reasons why the KJV or Majority text is the better Bible to follow.