Total Depravity: 7. What does the Bible really present?

Total Depravity: What does the Bible really present?

Total Depravity. I think www.gotquestions.org presents a good, clean presentation of the Calvinist position, so let’s start there: 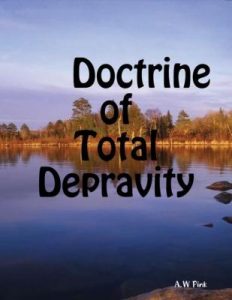 While often misunderstood, the doctrine of total depravity is an acknowledgement that the Bible teaches that as a result of the fall of man (Genesis 3:6) every part of man—his mind, will, emotions and flesh—have been corrupted by sin. In other words, sin affects all areas of our being including who we are and what we do.

Isaiah 64:6). It acknowledges that the Bible teaches that we sin because we are sinners by nature. Or, as Jesus says, “So every good tree bears good fruit, but the bad tree bears bad fruit. A good tree cannot produce bad fruit, nor can a bad tree produce good fruit.” (Matthew 7:17-18).

The total depravity of man is seen throughout the Bible. Man’s heart is “deceitful and desperately wicked” (

The Bible teaches that because unregenerate man is “dead in transgressions” (

Ephesians 2:5), he is held captive by a love for sin (John 3:19;John 8:34) so that he will not seek God (Romans 3:10-11) because he loves the darkness (John 3:19) and does not understand the things of God (1 Corinthians 2:14). Therefore, men suppress the truth of God in unrighteousness (Romans 1:18) and continue to willfully live in sin. Because they are totally depraved, this sinful lifestyle seems right to men (Proverbs 14:12) so they reject the gospel of Christ as foolishness (1 Corinthians 1:18) and their mind is “hostile toward God; for it does not subject itself to the law of God, for it is unable to do so” (Romans 8:7).

The Bible teaches the sinfulness of man, and what the Bible does teach is that when it comes to being accepted before God for salvation (entering the presence of God), we have nothing “good” to offer God in exchange for our salvation, i.e. we have “no merit” in ourselves. We are bankrupt spiritually. I do not doubt that many Calvinists believe in this, and this is totally true.

As we have seen through this series of studies, just as the Bible teaches the above things, the Bible also teaches that there is a walk or way of life that a Christian can live and it is seen as acceptable or pleasing in the eyes of God. If our nature is sinful (true), and we can, by God’s grace, do things that please God, then our balance and position has to be holding both. To stretch our sinfulness to make it a “total inability” to do anything that is pleasing in God’s eyes is as much a heresy as any other heresy.

Now the question is, does the Bible present man as totally inable to do anything that pleases God, to even respond to the gospel offer of salvation? Here the Calvinist is wrong, because his conclusion of “total inability” is wrong. Throughout Scripture, God offers man the apparent “choice” of receiving God’s offer (believing or having faith, which first must be conditioned on a repentance or rejection of sin). To say otherwise is to twist the most obvious point of Scripture.

John 1:12 But as many as received him, to them gave he power to become the sons of God, even to them that believe on his name:

God says that if a person receives Jesus Christ as their Savior, that He will give them the power and ability to become the sons of God. In other words, God gives men ability to act. This is an inherent, mankind wide promise, not to any select group (like the elect) but it is unilateral, i.e. Jesus places no restrictions on, but said “as many as”. Man must exercise his own free will in order to be saved.

A perusal of Scripture will bring to mind cases where obviously God said that some individual “pleased God”. Noah (Gen 7:1 “I have seen that you are righteous before Me in this generation“, Gen 6:9 “Noah was a just man, perfect in his generations. Noah walked with God“), Job (Job 1:1 “that man (Job) was blameless and upright, and one who feared God and shunned evil“), Enoch, David, and the list goes on of men that somehow by the way they lived their lives, “pleased God”. Were they saved by that good conduct, no. The Bible makes it clear that the only way to salvation in ALL DISPENSATIONS is the same, trust in God’s provision of a Savior or Messiah, and not in one’s owns works.

But to say that ANYTHING we do is disapproved before God is to twist the truth of Scripture. We do not have to jump to the conclusion of good works salvation if we reject total depravity.

Along with this is the doctrine of progressive revelation in which God has progressively opened up man’s understanding as to God’s ways and will. We cannot hold Adam responsible for the same amount of things that a modern man with the entire Bible at his disposal. True, Adam walked in the garden and talked with God. But at the same time, those topics that God and Adam talked about probably never entered into the chosen nation of Israel, nor the levitical laws, much less the church and her ordinances. Some of the general principles like sacrifices with the shedding of blood perhaps were discussed, but we cannot hold everyone accountable like what God has given us.

But the Word of God clearly gives us commands, and these commands are given with the idea that if we obey them (which we are able to do so in the context of God giving them to us), then we would please God with that conduct.

This is not the Bible’s perception of these things. God presents the truth as being that we have a decision to make, and that is to hear and obey God, or to do other. Hearing and obeying God is what gives us the blessing of God, by which we enter into an approved state before God.

Ezek 18:21 But if the wicked will turn from all his sins that he hath committed, and keep all my statutes, and do that which is lawful and right, he shall surely live, he shall not die.

If total depravity and total inability was biblically true, God would be a liar in presenting this verse to us. In other words, there is a key “turning” which is a decision within us. This ability is like everything that we have or are, God has provided it for us. We have the ability to turn from sin, and to God. Doing this gives us spiritual life, and not doing this provokes spiritual death. Therefore the point here is that God places a decision upon man’s shoulders, and on the basis of that decision that man makes, or if he refuses, that is also a decision, then God judges that man as a child of God or not.

What condemns a man is the lack of believing in God. In other words, men are not saved because of their lack of faith in the salvation God has placed in Jesus’ dying on the cross.

Rom 1:18 For the wrath of God is revealed from heaven against all ungodliness and unrighteousness of men, who hold the truth in unrighteousness; 19 Because that which may be known of God is manifest in them; for God hath shewed it unto them. 20 For the invisible things of him from the creation of the world are clearly seen, being understood by the things that are made, even his eternal power and Godhead; so that they are without excuse: 21 Because that, when they knew God, they glorified him not as God, neither were thankful; but became vain in their imaginations, and their foolish heart was darkened. 22 Professing themselves to be wise, they became fools,

The point here is that while man is in his sinful state, he is responsible for responding to God’s manifestation of salvation. Clearly Paul understood that man is responsible for not responding, even though he is in the state of sin. There is ability if there is accountability. In other words, if man was totally unable to respond to God’s offer of salvation, it would be unjust of God to hold man accountable.

Rom 6:17 But God be thanked, that ye were the servants of sin, but ye have obeyed from the heart that form of doctrine which was delivered you.

Being in a state of sin, men can obey the gospel and be saved. God always places the believing on man’s part, what he must do in order to be saved. Faith is not attributed directly to God, i.e. God does not send faith into a man’s heart so that he can believe. But rather God’s part is to be of such a character that men can easily believe in Him (place their faith, confidence, and trust in God).

John 20:31 But these are written, that ye might believe that Jesus is the Christ, the Son of God; and that believing ye might have life through his name.

Acts 16:31 And they said, Believe on the Lord Jesus Christ, and thou shalt be saved, and thy house.

Rom 10:9 That if thou shalt confess with thy mouth the Lord Jesus, and shalt believe in thine heart that God hath raised him from the dead, thou shalt be saved.

Mark 1:15 And saying, The time is fulfilled, and the kingdom of God is at hand: repent ye, and believe the gospel.

In the Calvinist scheme of things, the order is wrong. A person is first elect, and being elect, God then sends faith to the unsaved man, and then after God regenerates his heart, he has faith, and finally he is saved.

If this were the correct biblical order, then God would call men to look to their election, and God would not call men to believe. This is of critical importance, understanding that faith is man’s duty, and salvation comes after a man has faith. God’s part in faith is in Christ being crucified on the cross.

Matt 9:2 And, behold, they brought to him a man sick of the palsy, lying on a bed: and Jesus seeing their faith said unto the sick of the palsy; Son, be of good cheer; thy sins be forgiven thee.

Mark 2:5 When Jesus saw their faith, he said unto the sick of the palsy, Son, thy sins be forgiven thee.

Luke 7:50 And he said to the woman, Thy faith hath saved thee; go in peace.

John 6:39 And this is the Father’s will which hath sent me, that of all which he hath given me I should lose nothing, but should raise it up again at the last day.

2Cor 1:23 Moreover I call God for a record upon my soul, that to spare you I came not as yet unto Corinth. 24 Not for that we have dominion over your faith, but are helpers of your joy: for by faith ye stand.

Rev 14:12 Here is the patience of the saints: here are they that keep the commandments of God, and the faith of Jesus.

This last one says WE KEEP the faith of Jesus.

This entry was posted in Calvinism and tagged gads. Bookmark the permalink.