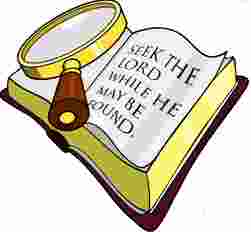 Isa 55:6 Seek ye the LORD while he may be found, call ye upon him while he is near:

Belief in the Inspiration of Scripture is key

You can tell a lot about a person by how they see and treat Holy Scripture. The question constantly should come to the forefront of every believer’s mind, is my pastor (mis) Using Scripture or Following Scripture? For a true believer, he will always use the Bible as a manual or guide to life. When things are very important, when things are not going the way they should, or when there is conflict and problems, a true Christian always take what is involved and goes back to the Bible! This tendency to rely upon (believe in) the Scripture is what marks him from the pagan wolf in sheep’s clothing.

When we see the church languishing with people leaving, offerings down, and bills pile up, what does the real pastor do? He goes back to the Bible to reorder what the church was doing and try to bring it under the divine principles. Whether it was or not, something was wrong, and he begins to fix things (the Pastor has the responsibility to fix whatever is wrong in the church) by first teaching and preaching the divine commission (do the work of God, what is the work of God). Once he does that, explaining what the Bible says and what “we are doing”, then he goes to prayer, and prays for God to work a miracle in his case.

Believing in the Bible and practicing prayer are the two marks of the man of God. When preachers come up with all kinds of programs and gimmicks that have no basis in the Word of God, you should know that you are probably dealing with either a novice in the ministry (at best) or a full fledged false prophet (at worst).

1Tim 1:13 As I besought thee to abide still at Ephesus, when I went into Macedonia, that thou mightest charge some that they teach no other doctrine,
14 Neither give heed to fables and endless genealogies, which minister questions, rather than godly edifying which is in faith: [so do].
20 Of whom is Hymenaeus and Alexander; whom I have delivered unto Satan, that they may learn not to blaspheme.

There are many “other doctrines” out there that seek to dominate the church, but the true man of God will resist all of these and focus his ministry on what is biblical (sound doctrine given to us by Christ and the apostles) and that which edifies unto godliness.

Deu 13:1 If there arise among you a prophet, or a dreamer of dreams, and giveth thee a sign or a wonder,
2 And the sign or the wonder come to pass, whereof he spake unto thee, saying, Let us go after other gods, which thou hast not known, and let us serve them;
3 Thou shalt not hearken unto the words of that prophet, or that dreamer of dreams: for the LORD your God proveth you, to know whether ye love the LORD your God with all your heart and with all your soul.

Here I do not think many people in Christendom would bow down to a wooden form which someone calls a “god”. But maybe not even in Moses day was this exactly what was happening. The false prophet presents other kinds of “gods”, such as money, fame, control, even sex, alcohol, and drugs for example. Homosexuality and lesbianism are other gods.

So what they actually do is to present “goals” or “methods” that have entangled within them these other gods. For example, easy-believism wants numbers as their god. Within getting large numbers, e.g. “we are the largest church…” are two errors of changing the gospel so that there is no more offense (repentance and abandonment are not present in their gospel), and there is a wrong motive of numbers, glory, fame, control, and power, and ultimately more money which seems to never be missing in the false prophet’s way of doing things.

2Thess 2:10 And with all deceivableness of unrighteousness in them that perish; because they received not the love of the truth, that they might be saved.

Using Scripture or Following Scripture? Again we see the issue appear, as the true man of God seeks to follow Scripture first for his own self, and then benefit the people of God under his charge. This comes out especially true when it is “inconvenient” to bring up certain issues that are actually not beneficial to his own self or the church. Rebuking powerful people (or their family) that give a lot to the church fully knowing that they will probably go to some other church when they get mad is a good example. The true man of God puts God’s principles and commandments before any person or carnal church gain that there may be.

God conditions true salvation on a precept which Paul says is “the love of the truth”. Without this, a person just is not saved. The only way a person can know the truth of God is by seeing and understanding it in the Scripture, the Bible. Having said this, we understand anew that there is a tremendously powerful relationship between Scripture (the source of all truth) and salvation (pleasing God).

People who say they are saved but follow false doctrine, and they accept the leaders in their cult or false religion who do not show the life of Jesus, that alone should cause them to leave the group. Likewise in our churches, Christians should not stay in a church where the leaders, especially the pastor, does not act the example of Christ.

Heb 13:7 Remember them which have the rule over you, who have spoken unto you the word of God: whose faith follow, considering the end of [their] conversation (lifestyle, conduct, and life).

We have a direct order to follow the life of those who rule over us. But note that these people who set doctrine and morality for us by teaching and preaching the Word of God, these people are to be targets of meditation for us, that we consider how their life corresponds to the Bible example, and especially to that of the life of Christ, and then we are to follow or imitate them. If they are not spiritual, if they are not like Christ, if they are poor examples, or they have flagrant sins or things in their life that simply are condemned in Scripture, then we should not follow them period. That means not follow their example, but we should not even be sitting under their teaching or their words.

False prophets “use” the Truth

One of the most important points of discernment is to understanding that true prophets (and believers) seek truth to personally “consume it” while false prophets use just some truths for their own benefit. Using Scripture or Following Scripture continues to be the issue in our discernment of a false prophet. For example the truth that we should obey our spiritual elders is very well understood in most cults. Disobedience is a sin under God’s scheme of things, but this is always under a true man of God, not a false prophet. David Koresh posted a calendar and had all of his women sign up when they were to sleep with him. He taught that the “joy of the Lord” is the most extreme good feeling that there is, and he concluded that this is sex, and since he also taught he was Jesus reincarnated, this was he having sex with the women. So he forced obedience on them.

This selective use and exaltation of one truth over others (like fornication and adultery are a sins) is exactly how the false prophet works. You must have a grasp on the whole of the Bible to see what they are doing is right or wrong in God’s eye. This “judging” is obligatory on every single believer.

Why is it that the false prophet insists that his people cannot lie to him, but he can lie to them? He can appropriate large sums of money from the offering for his personal desires, but he would sorely chastise any usher reaching his hand into the offering plate and grabbing what he would. See all the false prophet does is two-sided, one for the rest of the believers, and a privileged situation for him. This is HOW WE DISCERN that he is a false prophet.

I have seen some false prophets up close, and I notice that their sacrifice is minor, and they demand great sacrifice from their people. A pastor should be well paid if the church finances are good, but none-the-less, a good pastor will not want to burden the poor among them to sacrifice greatly for his pesonal benefit. Just the opposite, he should be helping the poor out of his own pocket. This is what makes the man a man of God.

One of the keys of discerning a true man of God from a false prophet is how he handles, or “manipulates” Scripture. The rule is that the man of God first seeks to order his own life under the principles of God, then he shares that with the congregation and applies these same principles to the administration of the church.

A false prophet is going to first do what is beneficial to him in some way other that spiritually. If the image of a man of God is a humble servant of Jesus Christ, then that image is usually what the false prophet pronounces and delcares loudly about his own self and his own ministry, but it is least seen in his character, actions, and speech. A person who tells you he is humble most assuredly isn’t. Character is seen, not announced, declared, or “proven” by single acts for that purpose. A false prophet that is stealing $10,000s of dollars from the church but makes a big event out of his giving a $1000 dollar check, putting it into the offering plate so all can see is just a lie from the beginning to the end. Even though he did donate that, it is only a deceptive act. There is no humility (because he announced it or used it to provoke others to give likewise). There is no real relationship between God and his own self, he just uses God, the church, the Bible, and the people for his own selfish ends.

Next installment: The Burden to Stop Sin

This entry was posted in False Prophet-Teacher, Marks of a Cult and tagged gads. Bookmark the permalink.