Sacraments or Ordinances? Are we to believe that specific ceremonial actions are going to save us?

Note that the Campbellites, Church of Christ, Disciples of Christ, make water baptism a requirement for being saved. While this is not the same position as Catholicism et al, it is in the ballpark.

What is a Sacrament? 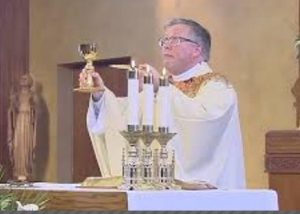 Roman Catholic Mass They believe the elements mysteriously become the actual body and blood of Jesus and partaking, they “earn” salvation.

To define a sacrament by those who believe in it, a sacrament is a ceremonial act done under the auspices of the official church (that being whoever is talking about it), whereby grace is communicated to the participant.

Having said that, their thought is that of a context of works salvation. So sacraments are an essential part of a works salvation based religion. You get grace from God (credits in your celestial account which is what God uses to see if you are saved) by getting wet in the baptismal waters.

So people who believe in and practice sacraments need to defend works-based salvation.

But what are the works leading up and entering into salvation?

The Bible proclaims we are saved by faith without works

The Bible proclaims that a person needs to repent of his sins in order to be saved. He also needs to believe in Jesus Christ as his Savior. Those are the requirements for a person to be saved. Having done that, he or she can be assured they are saved.

But works-based salvation never gives the individual the security that they are saved, therefore, they work to spiritually control the person under their dominion.  They propose an unspecific amount of good works in order to be saved, and at the base of all of that, they must be “loyal” to their particular church. Popes have stated that not even the Apostle Paul is in heaven yet, but is in purgatory working off his sins. Sorry, Christ did that on the cross, and no individual that believes in Christ needs to, nor is that able to remove the guilt of his sins.

The bottom line is all works based Grace procuring ceremonial actions are just trying to get in good with God, and man has no good, even in that.

What is an Ordinance?

An ordinance is a simple commandment that a believer does because God has told him to do so. I do not really like how this plays out though. Ordinances are specified by that because the Catholic Church has sacraments, and it is the counter doctrine to Sacramentalism.

True Christianity refutes false religions and dogmas and practices. Yes, I am on board. But in so doing in these cases, somehow we elevate the Lord’s Supper and water baptism above all the other commandments of God. Christians, good Christians, should be marked by their obeying God’s commandments.

Before we pass by this point, note that it is not so easy to comply with that. In the Old Testament, there were priests, animal sacrifices, and a lot of ceremonial actions that they were commanded to obey. Sabbath day observance.

So for the New Testament Christian, we cannot just accept that everything that everybody in the Bible says is for us today. For example, God commanded Abraham to sacrifice his son. Are we to follow his example today? I think not.

All of our beliefs and dogmas and spiritual practices should be placed in the context of what we live in today, from a biblical perspective. Let me expand on this point.

In the OT, God used a special group of people to intercede between God and common Christians. They were Levitical priests. They were dedicated to this intercession ministry.

In the NT, God has ordained every believer to be a priest between God and themselves. They are to offer spiritual sacrifices and praise to God. They individually worship God.

In the OT, a believer that was going to heaven had to essentially become a member of the nation of Israel.

In the NT, God directs those wanting salvation to local churches. Their relationship with Israel on an official level is very little to null. By the time of Acts, Israel was a God-forsaken, a godless nation. Becoming a citizen of Israel, or even holding that the Israel of today is God’s special people is very hard to defend.

How do we get Salvation?

Salvation is procured only through faith in the work of Jesus Christ on the Cross. This is a belief, a taking and esteeming that what is proposed by God in the action is actually true. There is no kind of credit by good works and you enter into heaven. Exactly the opposite. Belief, nothing you actually do with your body but with heart, head, and soul, is what God accepts.

More Articles on Issues within Doctrine and Practice

This entry was posted in Issues and tagged Ordinance, Sacrament. Bookmark the permalink.