Gen 6:5 And GOD saw that the wickedness of man was great in the earth, and that every imagination of the thoughts of his heart was only evil continually. 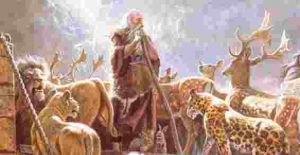 IF ever there were a verse to teach total depravity, it is this one. God declares that he is displeased with every imagination.. thoughts of mankind. He saw it as continual evil. But what is the context? While this is true, men sin, and the grossness of their sin at times comes to a climax which causes God to respond with wrath (the flood), there are individuals which do not fit in that mold (Noah). Calvnists don’t like to use this verse to prove their Total Depravity theory because within it is Noah and his family, people who broke the mold of total depravity by their righteous lives.

The issue we have with Calvinism is that Calvinism deposits man’s salvation as being controlled and triggered by election and predestination. That point is never proved by Scripture. Election is a broad term which includes “selection” to many different things, not just salvation. Being elect to salvation does not absolutely mean we personally have nothing to do with it.

The truth of the matter is that the Bible represents a person getting saved, first because God provided a way for them to be saved, and then secondly, because they individually respond to that way, embracing it. It is always “repent and believe”, and never, ever is it “look to see if you are elect”. What triggers salvation is not a realization that you are elect (never does Scripture present entering salvation because you “realize” something about your election), but rather a personal action of believing. Repentance is turning from whatever else you are embracing to embrace the salvation of Jesus Christ.

Gen 6:6 And it repented the LORD that he had made man on the earth, and it grieved him at his heart.Gen 6:7 And the LORD said, I will destroy man whom I have created from the face of the earth; both man, and beast, and the creeping thing, and the fowls of the air; for it repenteth me that I have made them. Gen 6:8 But Noah found grace in the eyes of the LORD.

The story of Noah is a first example of God’s great wrath against the sinfulness of mankind. Noah and his family were the only ones saved from this great wrath, although there is an argument that they suffered also from the loss of their fellow man. What is the gist of the Bible’s story about Noah. This is a key point where the Calvinist can say all the earth made God mad. All the earth except Noah. But what was different about Noah that kept God from destroying Noah also? Is it not that he lead a godly life? Was all the effort that Noah put forth to live godly in the eyes of God for naught? Can you actually say that there was nothing in the life of Noah that God was pleased with? If that is true, then why didn’t God destroy Noah with the rest of the world?

The Calvinist plays lose and dirty with God’s grace. The Calvinist (if he is honest to Total Depravity) will say that Noah had nothing good in him, and God shewed (“rained” sorry for the pun) upon Noah. This grace had nothing to do with Noah’s inherent personality and character, but it was totally God. Again, Noah found grace because of how he lived, what he was morally, not because God selected a person randomly and decided to save that wicked, horrible man Noah when he didn’t have anything good in him.

Grace is dependent upon repentance and holiness in the person of the individual, not totally independent of anything a man does. All men who repent and follow God’s holiness are redeemed by God. Yes, I know, we are all sinners, but God’s salvation is triggered by a decision in man, and God works in man both before (bringing him to this point of repentance), and also after (making him truly holy). This personal decision to believe God and to seek to please God is what triggers salvation in man. This MUST be in response to God’s true offer of salvation, and not to false offers as other religions present it.

But the issue is that God was pleased with Noah and his life, and this was even though God was working in all men, trying to activate their consciences, but the totality of mankind except Noah and his family simply refused God’s working in their consciences, so God got mad and destroyed them. God saved Noah and family because they were different. If they were not, why were they not destroyed likewise?

Gen 6:22 Thus did Noah; according to all that God commanded him, so did he.

Gen 7:5 And Noah did according unto all that the LORD commanded him.

Gen 8:20 And Noah builded an altar unto the LORD; and took of every clean beast, and of every clean fowl, and offered burnt offerings on the altar. Gen 8:21 And the LORD smelled a sweet savour; and the LORD said in his heart, I will not again curse the ground any more for man’s sake; for the imagination of man’s heart is evil from his youth; neither will I again smite any more every thing living, as I have done.

The Bible presents Noah in the light that his life, person, and actions pleased God. Besides obeying God, Noah expended his life in service of God. This we will find is another key concept in pleasing God and coming under the grace of God. Nobody can “find the grace of God” without entering the same way. Even Jesus, in his perfect life before the eyes of the Father, was exactly in this form, obedient to God, and total sacrifice in service to God.

Heb 11:7 By faith Noah, being warned of God of things not seen as yet, moved with fear, prepared an ark to the saving of his house; by the which he condemned the world, and became heir of the righteousness which is by faith.

Noah’s righteousness is keyed to his faith. God saw Noah’s faith AS RIGHTEOUSNESS. This goes back to esteeming God by “hearing” God’s word, and believing it. Faith produces holiness and righteousness because faith implies belief and obedience to those declarations which God makes. Responding with you life to God’s Words is what saves you. You believe or have faith in God’s words, and that response is really an exaltation and esteeming of God’s words TO BE TRUTH. Because God says these things (man is sinful, Jesus died on the cross to save you, etc), and YOU RESPOND TO THEM IN FAITH BELIEVING THEM, and this belief or faith finds lodging in your life, i.e. you live it, then God saves you.

1Pet 3:20 Which sometime were disobedient, when once the longsuffering of God waited in the days of Noah, while the ark was a preparing, wherein few, that is, eight souls were saved by water.

Again the same elements reappear in our examples, the gross disobedience and disrespect (ignoring) of God’s will is what enrages God, and the example of an obedient “believer” is what pleases God.

Gen 17:1 And when Abram was ninety years old and nine, the LORD appeared to Abram, and said unto him, I am the Almighty God; walk before me, and be thou perfect.

God presented to Abraham a command to walk a particular way before God, and to be perfect. If we accept that every man is a sinneer which clearly Paul preaches, then Abraham was a sinner. What does God mean here?

Perfect means whole, complete. Calvinism has made the concept so sterile and foreign that only God can be perfect. Apparently this perfection that the Bible speaks of was something obtainable by Abraham, otherwise God would not have made his principle first exchange with Abraham this matter.

Okay, let’s back up and review. The Calvinist says that everybody is totally depravity. There is nothing in any person’s life that is acceptable or pleases God. Even in the Christian’s life, he says that all of the Christian’s efforts at pleasing God is trash, rejected out of hand before any consideration that it is worthless and does not please God. When we read verses like Proverbs 11:20, then the Calvinist returns to the Bible saying that we do do things that are pleasing to God because God’s Holy Spirit overpowers us, and against all our will and desire and participation, produces something acceptable before God. So the Calvinist will recalcitrate on this point if you pressure him enough, but he still does not explain how a normal Christian will produce something worthy of God in the light of Total Depravity, and moreover, how does God produce something acceptable and pleasing to Him without the person really cooperating or highly desiring it?

This entry was posted in Calvinism. Bookmark the permalink.