This post continues the study on False prophets found here.

No Profound Respect for the Word of God 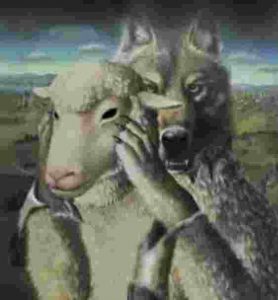 One, of the key understandings that will open up a lot to us, is to understand the false prophet’s relationship with the Word of God. At his heart, he disobeys God and works his own way through the world, using the Bible many times for his own advantage, and inventing alternatives when it suits him. He is marked by his cruel and brutal treatment of God’s Word. Verses that would restrain his own evil conduct are blatantly ignored, and yet, other verses that would be useful to control his members are browbeat into his people.

If the false prophet were to completely with sincere heart obey the Word of God, he would not be a false prophet. What makes him a false prophet is that he refuses the message of God for the people under his ministry, and he makes his own message. We ask ourselves “why would he do this?” The answer is because he cannot get his objectives in any other way. The handling of the Word of God is very careful, skilful, and there is no deep probing in his own heart, where he seeks God’s help in meditation upon his own life and ministry to change what he is doing to make it more biblical. Oh yes, there are those great false prophets today who speak of their special times with God in which supposedly God speaks to them and gives them inspired new plans. It is interesting that when one of these false prophets does come up with this, it is always (1) completely different from what is in the Scripture (for example, G12, Hinn, Cho, etc. with their pyramids of 12 apostles, each with 12 more disciples, etc, which is never seen in the Bible, or cells, which likewise the church is never called a cell, nor does it function outside of the structure of “a church”). (2) they take a catch phrase, or a single thought or word, and blow it up into a completely new plan or scheme, like the “Jehovah’s Witness“, Nephalim of the Mormons, etc. The false prohet’s “encounter with God” (G12 and Alcoholic Anonymous use this “having an encounter with God” like Abraham) results in something new, not a return to the standard established way of doing things as presented in Scripture.

Note that the strategy of the false prophet is that he must sutlely break his people’s belief system on the authority of the Word of God without them knowing what he is doing. This is difficult at best, impossible at worse. So what he does is to illuminate his members by great insights, many times valid Bible exposition, to build up a respect for him among his people. At some point “down the road”, he then begins to insert changes or additions to what the Bible says. He then focuses on how much we have suffered for not having noticed this before. This reinforces his authority as sole interpreter of Scripture, and again “weans his members from the Word of God.”

Acts 20:27 For I have not shunned to declare unto you all the counsel of God.

Paul spoke of teaching “the whole counsel of God”. The false prophet is very sutle in that he does teach some of the good counsel of God. Remember, rat poison is 99% good grain, and 1% poison. His teaching of standard doctrine is what gets and keeps his identity as a “man of God”. It is where he goes off and what he never preaches that marks him as a false prophet. Even the Roman Catholic Church believes in the Virgin Birth of Jesus. The fact that a false prophet teaches something that is biblical is not remarkable, but rather understood that that is how he identifies himself as “sheep” or “good guy”.

No Real Pursuit against Sin

In the ministries of false prophets, there is no real pursuit of sin. You may say, but David, so-and-so false prophet has an altar and many people come forward all the time. Yes, Billy Graham for example has literally thousands come forward for salvation after his presentation of the Gospel. This is one of the highest desired adornings for a false prophet, the “apparent moving of God”. This is what they see. But because your pastor has an altar call and every service many people come and knee, that does not mean anything. Emotionally these false prophets want their people to come. What it means is that he has presented another piece of his doctrine of the falsehoods of Satan, and he has people who has fallen for it.

We should define some more things here. (1) True, biblical preaching always has a changed life as its objective. Pure head knowledge is useless spiritually. The more you know about the Bible, the more arrogant you get. (2) The mission God gives his ministers is to change people’s life spiritually, beginning with salvation. This means that a life changing paradigm shift is necessary at the beginning of true Christian life. Each person should put their faith in Jesus Christ. This faith or confidence is seen by “following Jesus” afterwards. (3) But there is direct preaching against sin in general (establishing the sinfulness of everybody) which takes away all hope leaving only hope in Jesus. When Billy Graham gives hope that false religions like Catholicism, Buddhism, Hinduism, etc. are going to get to heaven without Jesus, then he is not working the work of God. He is a hypocrite, because to get these people to work with him in his crusade, he will tell them lies like that, then stand up and say that people (these groups) need to commit to Christ. Which is it Billy? (4) The establishment of a person “in” Christianity and “in” Christ is by a repentance of their sins (generally and specifically), and this repentance over what is wrong in their lives, and changing and embrassing of Christ’s way is what a good minister seeks. The false prophet doesn’t work this way. He defines what is right and wrong, and then he wants his people to come and repent TO HIM for their unfaithfulness TO HIM and HIS MINISTRY. Notice the shift from Christ to HIM?

True repentance is the goal of every true minister of God. That means the people actually change their lifestyle to what God sets forth. Show is cheap, and when you see the same people kneeing time after time, but never changing their life, then you see the same hypocrisy of the false prophet showing up in his followers.

False Security and Disaffection to Truth

Let me illustrate this with the false prophets of easy-believism. These people go out en-masse to “witness” in the streets and homes of the people, giving them “the gospel”. First of all, notice that their version of the Gospel is defective. Their goal is to get “credits” by counting heads of people who “are saved”. So repentance of sin is not a topic they present. Their goal is first of all and egotism of what good works they are doing (the false prophet pumps this heavily, but he himself rarely actually goes out door to door expect as a show to impress select of his lemmings). The goal being a “numbers game” (“we had so many people saved, so God approves of us, and we are special in His sight.”) Secondly, they pressure people to do what they say “to go to heaven”. What do they say to do? To repeat a prayer after them. If the person agrees and prays (basically to get them off their back), then they rapidly assure that person that they are saved and nothing can ever change that. They then make a great plea for them to come (at least a single time) to their church and be baptized. Remember “nothing can take your salvation away from you now”.

What they are doing is first of all telling the person that by a simple “good work” of a simple sinner’s prayer, they are going to heaven. It is true, once saved, always saved, but these people don’t need to hear that. What they interpret this as, is that they cannot go to hell no matter what they “don’t do, like following Christ”, or what they do wrong, like stealing, cheating, lying, fornication, drunkness, adultery and fornication, etc. They rest assured that they will still go to heaven. It has been my observation that they will have 1000 “saved” but only 100 or less baptized, and of that 100 maybe they have 20-25 continue to attend their meetings.

Our goal in evangelism is not numbers but changed people, people really going to heaven. Can a person who goes through this sham really be saved? Doubtful. Even those that are baptized and continue to attend the church isn’t really saved. They don’t understand the Gospel, so how can they be?

Consider this, what better plan could Satan come up with than to make a person think he is saved when he is not, then overly convince that person that he cannot lose this salvation (which isn’t real), and then come into a “Fundamental Baptist Church” only to be offended and never want to return or hear anything from the group or any other church like them in the future? Great plan direct from the pits of hell.

The false prophet works in two directions, (1) to get people into his “group” (which is always the most straight, “biblical”, and extremely “right” brand of Christianity that there is) and then to make them believe that they are “saved”, when they are not. The hardest part of witnessing to most people is to get them to understand that they are not saved when they think they are. The false prohet works to destroy the true work of evangelism. Notice here that the energetic “witnessing” of the Jehovah’s Witnesses has all but ruined evangelism for the real church of God. People don’t want to talk to people going door-to-door talking about God. (2) If the false prophet cannot get these people into HIS group, then his plan is provoke a breech between them and all churches (good churches) so that they don’t go anywhere. He does this by his actions and speech in offending them.

ch38 Recognizing a good pastor
ch41 The marks of a bad minister
ch43 Time to leave your church?
ch49 The Biblical Pastor

See also
There is a work by Puritan Thomas Brooks “Touchstone of Sincerity” in which he presents 13 wills/will nots of a hypocrite. This work is very much akin to the topic of the False Prophet (which is also a hypocrite under it all). Excellent Read!

This entry was posted in False Prophet-Teacher and tagged gads. Bookmark the permalink.