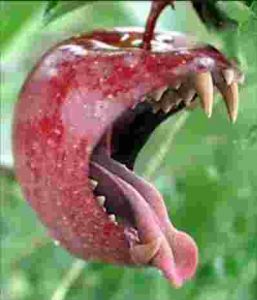 False Prophet bad Fruit. Christians have the obligation to be fruit inspectors. We cannot ignore the possibility of a cherished minister actually being a false prophet. This could be that he always was bad, or that being good, at some point he turned bad.

Here we need to look at a couple of things, and not be deceived by the “misdirection” these magicians use to deceive. We start asking honest questions. What kind of ministry did this guy establish? Is it biblical? Look at the people he has gathered. What kind of people gravitate to this ministry and this minister? What economic success have they achieved, and how does that relate in their priorities and central focus? Are there blatant carnality seen on the surface? How does the leadership react to sensualness, carnality, and worldliness? Are they focusing on fame and recognition rather than doing God’s work?

John 15:8 Herein is my Father glorified, that ye bear much fruit; so shall ye be my disciples.

If Jesus desires us to produce fruit, what kind of fruit should we be producing?

Gal 5:22 But the fruit of the Spirit is love, joy, peace, longsuffering, gentleness, goodness, faith, Gal 5:23 Meekness, temperance: against such there is no law.

Take a hard look at these characteristics of being filled with the Holy Spirit, and ask yourself, do I see these things abounding in the lives of the pastor and leadership? When a man tells you he is humble, he is not. When a man brags about what he has done for the Lord, he is really disqualified from the ministry really. We do not serve men but God, and therefore we do not worry about men’s praise, only God’s praise or condemnation of our work for Him. If that is not apparent in the man, the leaders, the ministry as a whole, then we should get away from that ministry.

Matt 7:15 Beware of false prophets, which come to you in sheep’s clothing, but inwardly they are ravening wolves. Matt 7:16 Ye shall know them by their fruits. Do men gather grapes of thorns, or figs of thistles? Matt 7:17 Even so every good tree bringeth forth good fruit; but a corrupt tree bringeth forth evil fruit. Matt 7:18 A good tree cannot bring forth evil fruit, neither can a corrupt tree bring forth good fruit. Matt 7:19 Every tree that bringeth not forth good fruit is hewn down, and cast into the fire. Matt 7:20 Wherefore by their fruits ye shall know them.

Christ’s point is that a heart (evil and corrupt, or pious and godly) will produce after its nature. What is in a man’s heart will eventually come out and be shown by the acts and words of his life.

The Bible has some difficult passages which would really cause us to think there are conflicts in it. On the one hand, a person is saved by faith in the work of Jesus on the cross. On the other hand, God judges us according to our character, and it would appear that that judgment would be an eternal kind of judgment.

There is really no problem here though. If a person is saved, his heart will change. This is not the norm, it is not mostly, IT 100% of the time. There are no exceptions. That changed heart, from wickedness into a child of God, will manifest itself by producing spiritual fruit (what it desires and hold dear).

As a tree, the tree produces fruit according to its nature, and this is true for believers and unbelievers, but it is ever more true for ministers. A man’s ministry is a projection of his desires and spiritual character.

Some examples are in order here. Rather than condemning Baptist brethren, let’s look at Catholic priests. Is there no linkage between their false doctrine, their perverse heart working to control and squeeze their people and the fact that it is common for Catholic priests to be drunk, womanizers, and child abusers? Homosexuality is a fixture in the Catholic celibacy system. Pope Francis has openly admitted that most priests are homosexuals. The Catholic church has been paying 100s of millions of dollars in the United States every year to cover up and satisfy victims of their priests.

The fruit is putrid, and that is because the tree is unholy.

When you see a Baptist pastor fornicate with some woman that is not his wife, you know he is bad. What you don’t realize is that the entire ministry and thinking of that ministry is also bad. The problem in most Baptist churches today is when one pastor falls into sin, they choose another minister to fill his place from the same mold that he was taken from. There is no change really except to cover your tracks better.

Bible exhortations to consider the example of your minister

You see many people say that it is impossible to live a godly life. They complain to God that it is too much, too hard, impossible, not feasible, and simply not doable. God answers with, “I have placed leaders in the local church who are doing it.” No they are not sinless, but they are good examples of exactly that man of God which the Bible exhorts us to be.

Heb 13:7 Remember them which have the rule over you, who have spoken unto you the word of God: whose faith follow, considering the end of their conversation.

This passage of Scripture is key here. If you cannot, in all honesty, say that you would like to be like your pastor, to follow his moral example that he lives, then you should get out from under that pastor. The fact of the matter is that YOU WILL BE LIKE HIM, no matter what you think or try. His spiritual example leading the church and preaching and teaching to you will be “caught” by you, and you will be like him. Note: What is his problem? He preaches the Word of God but doesn’t practice it. That is hypocrisy and that is the road you are going down by knowingly understanding the unholiness in his life, and then covering it up, pretending it is not important or that it will not affect you in the end.

1Pet 5:2 Feed the flock of God which is among you, taking the oversight thereof, not by constraint, but willingly; not for filthy lucre, but of a ready mind; 1Pet 5:3 Neither as being lords over God’s heritage, but being ensamples to the flock. 1Pet 5:4 And when the chief Shepherd shall appear, ye shall receive a crown of glory that fadeth not away. 1Pet 5:5 Likewise, ye younger, submit yourselves unto the elder. Yea, all of you be subject one to another, and be clothed with humility: for God resisteth the proud, and giveth grace to the humble.

This passage is loaded with good direction. First of all, note that the charge to a minister is to be an example to the flock of God. Is your pastor an example? Consider and weigh if he is or isn’t in these areas:

The issue is very clear, a pastor is disqualified if he is a hypocrite. He must live the example of the principles that he proposes and espouses.

The Bible presumes that if they are not, we should not have anything to do with them.

See my tracts
ch38 Recognizing a Good Pastor
ch41 Marks of a Bad Pastor
ch43 Time to leave your church?

From my book in Spanish “False Prophets and Teachers”

We can identify a false prophet by…
I. By their Fruit – What they do or produce by their life and ministry

1. The fruit of their doctrine is bad.
2. They don’t do God’s will.
3. They promote the worship of other gods or other doctrines.
4. They disobey biblical restrictions and instructions.

II. By their methods – How they do what they do.

5. They tend to excessively control (enslave) the brethren.
6. They illicitly take money from the brethren.
7. They sacrifice the sheep, and they don’t sacrifice themselves for the sheep.
8. They have a tendency towards being cruel and harsh.
9. They don’t have integrity.
10. They fabricate their own vision that is not of God.
11. They deceive by “doing” miracles as a means of gaining authority over the people of God.
12. They preach things that don’t result in piety nor spiritual maturity and strength, but rather vanity.
13. They have a tendency towards not confronting sin, especially when that sin is in their own lives, or in the privileged among their own people.
14. They reject, despise, hate, and denounce true authorities.
15. They tend to exaggerate (lie).
16. They make an exception of persons to benefit their own person or ministry. (They play favorites)
17. They want to praise men and recognize them.
18. They are heretical (cause divisions over unity in doctrine).

III. By their character – what they are morally, what is in their heart.

19.  They want to appear as tremendous Christians, but inwardly, they are ravenish wolves.
20. They have a tendency to be proud and arrogant.
21. They side-step the standards of God for themselves.
22. They are murmurers.
23. They are contentious.
24. They are mockers.
25. They are sensual, without the Holy Spirit.
26. They are blasphemers, attacking the person of others.
27. They are people without any real rules, without principles, without integrity.

This entry was posted in Marks of a Cult and tagged Marks of False Prophet. Bookmark the permalink.