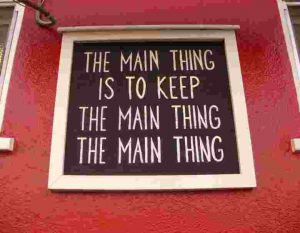 What is the Churchs Purpose?
By Pastor David Cox

Before I begin, some personal background. I am a missionary, and I started visiting churches presenting my ministry in Mexico to churches back in 1983. I have probably visited some 700-800 churches in my lifetime. While a goodly number of churches I have little to no idea of how they function, and what the thinking of their pastors really is, a lot of them I do see into their philosophy from talking at length with the pastors, and seeing them function on a Sunday in their services. Let me also say that over time, a missionary can discern a lot about a church from the details that are readily visible.

My Observation of American Christianity

After seeing so many churches, examining them from “the inside”, trying to revisit them in a few years to see new pastors, and seeing the old pastor “pop up” in some other church, well, my conclusion is that most pastors don’t have a clue about what a church is supposed to be, nor do they have any idea what they as pastor is supposed to be doing! This would be funny if it were not so tragic.

I have seen ridiculous things, to funny things. One time a pastor was working on retiring and set his son (without ministerial training) to take over the church once he was retired. During the transition, the son turned on his father. The father forbid and rebuked the church from allowing his son to take over. This all peaked in a power play one night when the father pastor was in the pulpit, and the son came and “took over”. The father would not let his son take the pulpit, but the pastor held on to the two sides of the pulpit with both hands, and the son tried to forcefully remove his father’s hands from the pulpit and push him off. This in the middle of the evening service.

Really? What happened to church being the house of God? Reverence kind of thrown out the door altogether.

How do we solve the problem

Recognize that there is a problem

The first step in setting things right is simply that we realize that there is a problem, and that we are responsible for it. It got this way because of us. 1) We did things wrong. 2) We did not do what we should be doing.

If most of the pastors I really get to know just take a step back and ask themselves if what their church actually is, is the way God envisioned His church in the New Testament, they would say no. That discrepancy should start the ball rolling, but it seems that never happens.

Status quo is that we are doing 1) what we have always done, 2) what everybody else is doing, 3) Our problems are no different from the rest of Christianity, etc. so the status quo is okay then.

Pastors just do not take time to meditate over what is wrong and what is right in their churches and ministries. Usually this only happens after they get kicked out of their church, or resign in a huff. Then they think through everything, see a lot wrong, and forget it all by the next time they are at the helm of a church.

Direct your Attention to where the Remedy WILL ULTIMATELY BE FOUND (Scriptures!)

What is the problem here is that as we examine “church” and what it should be, contrasting that against what it actually is right now, and then searching for a way for move things from what they are to what God wants them to be, we need to realize that all of this has already been contemplated by God. God has it already figured out. God has also already given us that answer. God has given us that answer in Scripture, and only if we take the time and exert the energy necessary to find that solution will we get out of the mess we are in.

First of all, we have to realize that the New Testament church is pretty what God wanted His church to be like. Yes there are some differences, like we have cars and they had carts. We have computers and cell phones and they had pens and paper. But essentially, the forms and patterns of the New Testament church are exactly what we should be imitating.

Secondly, “church” is not broken, so don’t try to change it to fix it to what you want it to be. The New Testament pattern is not broken, outdated, nor “non-functioning” for our modern world. It still works powerfully. We must go to it, not run away from it.

Being “old fashioned” is a complement, not a criticism. So many churches and people think that adhering to something “old” like ancient, like the Bible is a negative. That is Satan convincing people. That is exactly what we need to be seeking. The new is not better, but a rejection of that old gospel given to us once and for all.

Jude 1:3 Beloved, when I gave all diligence to write unto you of the common salvation, it was needful for me to write unto you, and exhort you that ye should earnestly contend for the faith which was once delivered unto the saints.

Once for all delivered unto us, never more to be changed. Our Christian faith is set in stone. It is not in transformation, much less is it morphing at every generation into something new and different. It is set.

The obvious conclusion or take away from that is that we must find what that is, and we must adhere to it, and never change from it. So many churches and pastors seem to be seeking, but not in the pages of Scripture, but in the popularity of men’s ideas. We need to get away from that popularity.

Recognize that the Pastor is Responsible for Fixing what is Wrong.

God has placed a man in a position of responsibility in the local church. That man is the pastor, the shepherd of God’s flock. I actually believe that God has set the norm and pattern as each and every church should be totally independent from all other organizations and churches, yet that church should have elders. Those elders should be working with the pastor in finding the will of God and moving the church in the right direction.

Some question if that is even possible. It smells of a board, and we reject church boards. The cry is who is ultimately in charge of the church? The pastor? the Board? Well the answer is neither. God is in charge, and God uses men and women of God to do his will. This means that the entire church is responsible for obeying God’s will, and the pastor, the elders, and the church congregation should all be lost in their identity in this thing, and pushing the church towards IT doing God’s will.

In other words, people need to worry less about control and power, and more about being found faithful and righteously doing God’s will instead. Pastors would take all the help that they can get, and to spread the credit is what they should accept. As well as spreading the blame if their decisions go wrong. It is no good thing that everything was part of a decision if it is a bad decision.

People should risk their personal security in standing up and doing God’s work. If it is right, then do it, and take whatever difficulties come from the doing of it.

Recognize that the Pastor is Responsible for Making what is right Work!

I am a pastor. But I realize that pastors are there to fix what is wrong. Some people buck against that saying that I am too authoritarian. Others like it, because it covers them when they act authoritarian. Both sides are wrong.

Pastors control the preaching content, the church focus, and the doctrine of the church. Because of that, they use those avenues to fix what is wrong. It is their burden, their glory, and their responsibility.

TO put it simply we go to the Bible. It is there.

This entry was posted in True Christianity and tagged gads. Bookmark the permalink.