Catholic Fleecing the Lambs is a study on how ministers get money from laymen on a scale that is unbiblical.

Let me say from the beginning that those that work in the ministry should live from those labors.

1 Corinthians 9:14 Even so hath the Lord ordained that they which preach the gospel should live of the gospel. 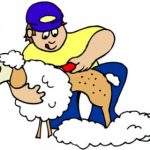 The principle of laypeople giving a salary to ministers is definitely the focus of the Bible. There questions in this issue though. First of all, exactly how do we definite or limit the ministers that live of their religious labors? I say this is a question or fuzzy area because a) the system cannot bear every person that does anything in a church as a full time paid worker. b) The amount of much of this “help” does not warrant a full salary, and even a stipend is too much in many cases.

Secondly, the Bible picture of this is that the people give voluntarily in the offerings and are not forced nor unduly “squeezed” for money. The appearance of God’s ministers is that they are not coveting money, especially unjustly taking the money of others.

Therefore, it is a biblical injunction for those said ministers that live from the ministry to teach what the Bible commands about tithes and offerings. Here, the principle that God’s people support God’s work including the salaries of the ministers is a biblical teaching that must be done. Catholic clergy don’t do this much because they live lavish lifestyles, and they charge for their services (Mass, weddings, funerals, etc.). That is a definite identifier that they have something wrong with their system. The giving is not free will but forced.

I live in Mexico, and it is interesting what I see. A funeral for a neighbor had the local priest come to perform a Mass for that person. They blocked off the street in front of my house so I was watching the entire thing. All the people that came to the funeral came walking, i.e. the majority used public transportation. They had no vehicle apparently. But the priest came in a big, bright, shiny SUV that looked new. So the priests live high personal lifestyles, and their people pay for it. That is why they have such a hard time teaching their people to tithe.

All this boils down to ministers living from the ministry, but not a lavish lifestyle. Catholicism as a false religion because it doesn’t follow the Scripture. They do not teach biblical concepts except when it may be advantageous to them.

My wife is Mexican and her mother was a Christian. She specifically obligated her children to not hold Masses for her once she died. But when she did die, various Catholic friends of her started with the visions of her mother in Purgatory suffering, and the family is obligated to hold Mass to get her soul out of Purgatory.

The Bible teaches nothing like Purgatory. After the fact of death, your eternal fate is sealed. This teaching is to squeeze money out of grieving family members. Beyond just being totally wrong to do this, it is unbiblical also.

Protestant Version of the Same

While we can observe within false religions how they organize their false religion so that they can make money off of things, we also observe how this cheapens and destroys true Christianity (which they don’t have, but with which they compete). Protestants are not above this complain either.

Many Protestant churches have become games. There are ladders and as you sacrifice to the work and to the pastor, you move up or down the ladder. We serve Jesus Christ and not some pastor of some church. Once you get your eyes off of Jesus as the goal of the Christian life, you are in a cult. Many Protestant Christians need to really mediate on what they are doing because they are really living for making their pastor happy with them.

This entry was posted in Catholicism and tagged Covetousness, gads, money and the minister. Bookmark the permalink.